Evidence in Education Is All the Buzz in the Beehive State

This article first appeared on REL West’s Institute of Education Sciences blog and is shared here with permission.

It’s been less than a year since the final state education plan under the Every Student Succeeds Act (ESSA) was approved by the U.S. Department of Education. Now, states are grappling with how to implement their plans, including the evidence provisions in the law. ESSA requires states to implement education programs, practices, strategies, and interventions—all of which are referred to collectively as interventions—that show evidence of effectiveness and identifies four tiers of evidence strength: strong, moderate, promising, and “demonstrates a rationale.”

This is why, over three days last spring in Utah, REL West staff delivered a series of workshops to leaders from local education agencies (LEAs) and schools to build their capacity to examine the evidence for interventions using the ESSA standards. The workshops also helped them to assess the fit of evidence-based interventions with their local contexts.

The Importance of Local Context 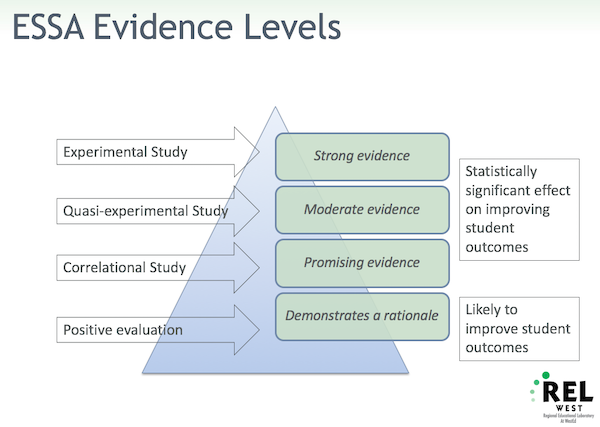 Across the three days, approximately 150 state and school district staff participated in the workshop series. During the workshops, participants examined district- or school-level data to identify a pressing need in a district or school. This was followed by a demonstration of using different resources for identifying interventions with an evidence base. For example, participants were given the opportunity to explore the What Works Clearinghouse to see if reviews existed for interventions they were currently using or considering in their districts. Finally, using tools from the Evidence-Based Improvement Guide, participants practiced assessing the evidence base for their selected intervention, identifying areas in need of additional evidence or clarification, and analyzing how well the selected intervention fits the context of their local settings.

Participants left the workshops with resources to go back to their districts and complete the process of identifying evidence-based interventions that fit best in their local contexts.

“The information [REL West] presented helped clarify misunderstandings, assisted stakeholders in reviewing data with a focus on critical areas of need, and…provided…a critical opportunity for LEA and school practitioners to learn,” said Dr. Rebecca Donaldson of the Student Support Division at USBE about the workshops.

The workshops built on a previous workshop that REL West delivered this past winter to USBE to help its staff take stock of the supports they provide to LEAs in the selection of evidence-based interventions. The delivery of these spring workshops for LEAs and school leaders facilitated a consistent approach to evidence use across the state.

REL West has conducted similar workshops in Arizona and looks forward to continuing to help the states in the West Region implement the ESSA evidence standards.